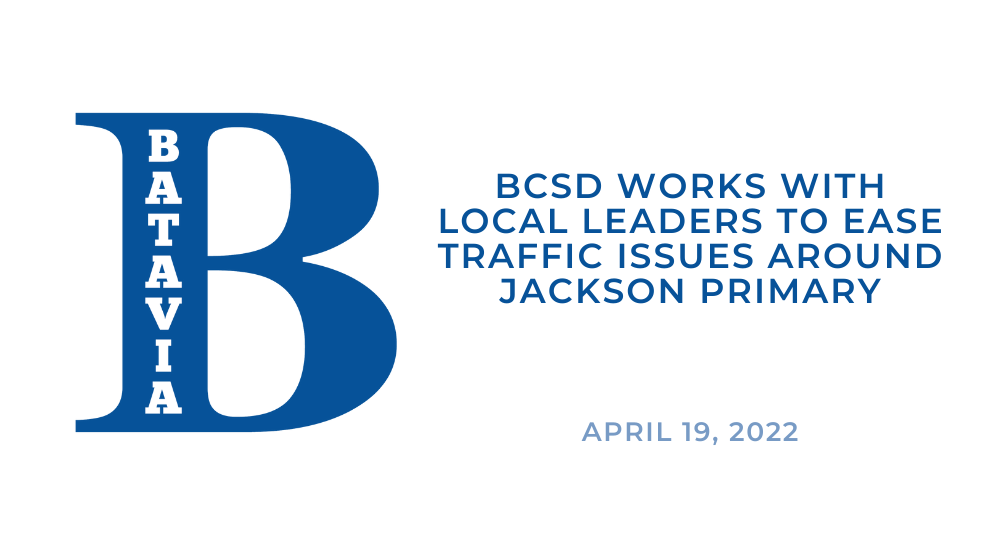 In an effort to ensure the safety of students and staff during arrival and dismissal periods at Jackson Primary, the Batavia City School District, Batavia Police Department, and City Church have joined together to create a new recommended pickup route for the City Church Community Food Distribution program at St. Anthony’s.

The City Church currently hosts a bi-monthly food distribution program for community residents at St. Anthony’s Church. Due to the program's popularity, some traffic concerns have emerged around Jackson Primary, resulting in serious safety issues along with traffic backups during school arrival and dismissal periods.

In response, a new route has been established to access the Food Distribution Program pickup line. The new route will be in effect starting with the April 27 distribution date. Those community members who wish to participate in the program must access Liberty Street via South Swan Street, Osterhout Avenue, or Otis Street. All food distribution traffic will be redirected to avoid Liberty Street between South Jackson and Sumner Streets and South Jackson between South Swan and Liberty Streets (the areas directly in front of and adjacent to Jackson Primary). Click here to view the updated route.

The City Church Community Food Distribution program is scheduled every two weeks for the following dates: April 27, May 11, May 25, June 8, and June 22.

“The Batavia Police Department is asking for the cooperation of all motorists in the area of the Jackson Primary during arrival and dismissal times to adhere to all parking and traffic regulations. Specifically, we want to ensure that motorists do not create unsafe conditions near the school during the City Church's food distribution dates as they wait in line. Therefore, we are requiring anyone attending the food distribution program to avoid the area of South Jackson between South Swan and Liberty Streets. We appreciate everyone’s cooperation to ensure the children remain safe during arrival and dismissal times,” said Shawn Heubusch, Chief of Police.

“I applaud the City Church for providing an important and valuable resource to our community. Our collective priority must also be the safety of our students, staff, and bus drivers at Jackson Primary. I’m happy the school district, City Church, and BPD were able to come together to reach a collaborative and mutually beneficial resolution. I also want to thank Batavia residents for their cooperation as we roll out the new route,” said Jason Smith, BCSD Superintendent of Schools.