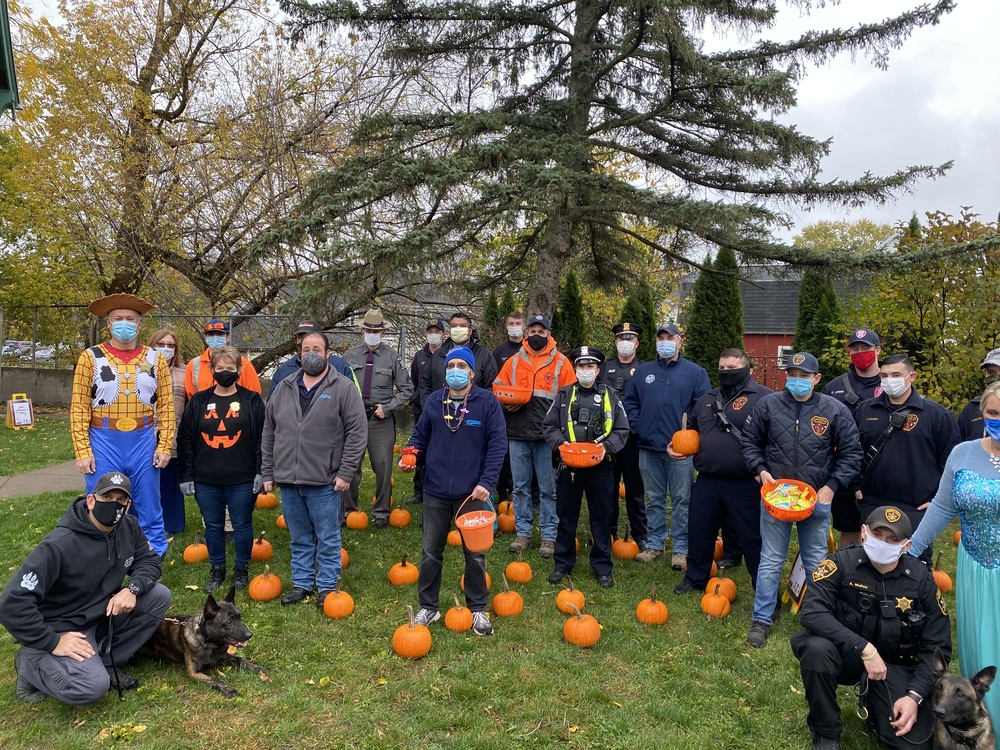 Jackson continues to strengthen community partnerships for our students 🎃

On October 28th and 29th students at Jackson Primary celebrated Halloween along with other fun fall activities during our first annual “Community Helper Day”.  We also provided fun alternate activities for those who do not celebrate Halloween. Our virtual students had the opportunity to drive through and pick up a pumpkin and a grab bag on Friday, October 30th. We wanted to ensure all students had the opportunity to enjoy the celebration.

Students came dressed in their costumes for Halloween and paraded outside to visit the community helpers and their respective vehicles in the bus loop. Students were able to see real life community heroes dressed in their everyday uniforms. These community helpers devoted their time to hand candy and goodies out to students at Jackson Primary. The community helpers included an EMT from Mercy Flight, Town and City of Batavia Fire Departments, New York State Troopers, Genesee County Sheriff's Deputy, First Presbyterian Church, Scofield Roll Off Services, The Department of Public Works, First Student of America bus transportation, Kyle Heassler, P.A. from Three Little Birds Pediatrics. Prior to the event, students learned about who a community helper was and why they are important in our community. We felt it was important for students to know that when they choose a costume of a community helper, now they can make the connection to see a real HERO.

The Batavia Police Benevolent Association and Firefighters Association each donated a bike to be raffled off to two Jackson Primary students!

After the Community Trunk or Treat, students had the opportunity to visit a pumpkin patch sponsored by the Parent Teacher Group. They did not need to travel far as the pumpkin patch was set up behind the school. Jackson Primary Parent Teacher Group helped to set up the pumpkin patch with 400 pumpkins donated by First Presbyterian Church. Jackson has had a long standing partnership with the congregation. They provided cider for the students when they went inside with their goodies and pumpkins. Tim Horton’s provided over 600 Tim Bits for the students to enjoy.  West End McDonald’s provided coupons for free ice cream or apple slices to our students as well.